After a recent post dealing with doing it our way or God’s way, I received an email from a reader who shared with me how much that post helped her put some things in perspective while dealing with a wayward child.  She told me she realized the need to let God handle the situation instead of trying to do it herself.  This really showed me how God takes the words I feel He gives me and uses them at just the exact time someone needs to hear them.  But it also made me realize even more the importance of being sure my words are His words and not just mine.

In dealing with wayward children, most parents would probably agree, we want to “fix” those children that choose to walk in rebellion.  We want to manipulate circumstances to force their return.  We see the pain their choices cause for them and for those around them.  The hurt is hard.  Yet we can’t “fix” them.  They have to realize their mistakes and choose to rectify them.  Waiting for their return can seem like an eternity.

In the story of the prodigal son, we see a dad who doesn’t stop his son from choosing the wrong path.  You know he had to be so hurt that his son asked for his inheritance before time.  This son was basically saying to his dad that he wished he were dead.  Ouch!  Maybe you’ve heard those words from a child and you still reel from the pain.  Maybe your heart is broken because of the decisions of your child.  Oh, how you want to “fix” it, but you can’t.  So what do you do?  The prodigal’s dad waited.  Every day he watched and he waited.  It doesn’t say he was praying, but you know he was.  Without prayer, I don’t believe he’d have had the faith to watch and wait.  Each day he stood by the gate and searched the horizon for that son to return.  We don’t know how long the son was gone, but finally, after sinking to the bottom, he recognized his sin and returned home, humble and contrite.

Where was the dad?  Watching, of course!

I love this story!!!  It was just another day like all the others he had watched for his son.  Then he spotted someone in the distance.  His heart would have started pounding.  Just maybe.  It could be him.  He stayed focused as the person moved closer toward him.  And then, he recognized the walk or the build or the color of the hair.  Something assured him that this was his son.  His son was coming home!!!  After all that time, he was returning.

Aren’t all of us wayward children at times in our lives?  We lash out at God.  We are so angry with Him because things don’t go the way we think they should.  In a way, we wish He was dead, out of our lives.  Yet so many times, we are angry with God when the truth is we are responsible for our situations.  God didn’t do anything to us.  We made really bad choices.  And bad choices have consequences.

The beautiful thing is that God is watching and waiting for our return.  And He won’t rebuke us if we humble ourselves before Him, confessing our sins and returning to Him.  He waits daily, watching for us.  And He runs to us with open arms as we return.

Just as the parents of that wayward child continue to love their child (but not their actions), God continues to love us and waits for our return. We are always loved by the Father.  Our actions? No.  But us? YES!!!  God loves us so, so much.  In fact, He loves us so much that He sent His only Son to become one of us, yet without sin, and to die in our place.  Now that is love!

Are you desiring to return “home” to the Father, but afraid of rejection?  Do you think you’ve done more wrong than can be forgiven?  Do you think you are unlovable?  Well, guess what?  You won’t be rejected.  You can be forgiven of anything you’ve done.  YOU ARE LOVED!  Why don’t you begin that walk toward the Father right now.  He’s waiting and watching for you to come home.  He loves you with an everlasting love. 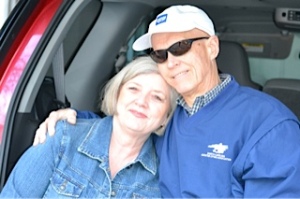